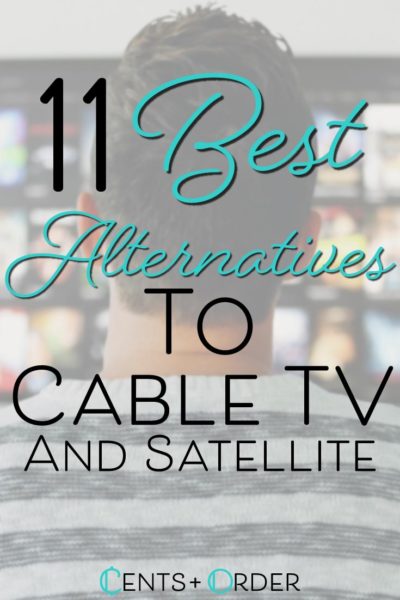 For the majority of our marriage, my wife and I have had to survive off one income — and a rather average one at that. Because of this, we’ve been forced to find creative ways to cut costs to keep our budget under control.

One of the categories that we realized early on in our marriage we could not pay “normal” prices for was TV. A recent study by Leichtman Research Group has found that average monthly spending among pay-TV is subscribers is $107. That’s nearly $1,300 a year!

Thankfully, you do not have to pay those kinds of prices for entertainment. There are many great alternatives to traditional cable TV and satellite that could save you a ton of money each month.

Because saving on TV is a bit of a pet hobby of mine, I’ve personally tested many of these options. I’ll give you the full scoop, so you know what to expect.

Here are the 11 best alternatives to cable TV and satellite.

Don’t laugh. Believe it or not, your local library is still one of the best places to get free movies, and even some old TV shows…for FREE.

We love our local library. What we do is get on our phones and look up “best love movies” or “best action movies.” Then we’ll head out to the library to see which movies we can find from these lists. I actually just went to our library yesterday and brought home five awesome movies that we can’t wait to watch.

Obviously, your library won’t be able to get you access to current TV shows. But if you mostly use your cable or satellite subscription to watch and record movies, your local library could be a worthy replacement.

2. An Indoor or Outdoor Antenna

Many people thought that cable TV would cause antennas to become extinct. But they have made a bit of a comeback in the past decade.

The case for using an antenna rose in 2009 when broadcast channels starting moving from analog signals to digital. That paved the way for broadcast towers to begin broadcasting in HD.

In fact, if you don’t currently pay for HD channels on your cable or satellite package, antenna channels will likely be better quality. I know that sounds crazy, but it’s true. And the good news is, nearly all TVs today are equipped to receive these digital broadcast signals.

What’s the best part? After the purchase of your antenna, your monthly TV cost would drop to $0.

How many channels will I get?

Where you live will play a major role in how many channels you can receive with an antenna. Also, it will determine how clear the signals will be.

If you live close to a largely populated area, you’ll have a better shot of getting a lot of clear channels. To find out how many channels you can expect to receive in your area, try using this tool from AntennaWeb.

Today, most TV channels have their own websites and apps. And many of them make recently-aired episodes available to stream for free.

Here are several of my go-to channels for watching TV content without a cable subscription:

Most of these networks also have apps on the popular streaming devices like Roku, Amazon Fire Stick, Chromecast, Apple TV and Android TV.

That means you can watch all of this free content on the best screen in your house (your TV) just like you would if you were paying for cable or satellite!

When it comes to cord cutting, Netflix is the company that started it all. And 148 million subscribers later, they are more popular than ever.

Netflix has morphed several times in its relatively short lifespan.

That said, Netflix still has a ton of movies and network television shows on its platform. No matter what you’re into, you can probably find content that will appeal to you on Netflix.

The cheapest Netflix monthly subscription costs $8.99, and the most expensive option will set you back $15.99 per month.

Like Netflix, Amazon Prime Video offers a great combination of movies, network TV shows and original content. Amazon is proud of its original shows, of which several have received critical acclaim.

If you end up liking Amazon Prime Video’s content, you may even decide to cancel your cable, satellite or Netflix subscription. This means you can essentially cut TV out of your budget altogether!

For those who aren’t Amazon Prime members, you can buy an Amazon Prime Video subscription separately for $8.99 per month.

Like Netflix, Hulu has undergone some changes to its service since its early days. Today, Hulu has two main plans: Hulu and Hulu + Live TV.

Hulu’s core business for a long time has focused on partnering with broadcast and cable networks. They make their shows available to stream soon after they air (usually the next day).

Their basic service still does this. Plus, it gives its members access to Hulu Originals and some movie titles. The price is great at $5.99. But remember, many of the shows on Hulu can also be streamed on the network’s own website and app.

For this reason, I would only pay for the basic Hulu package if there was a specific cable TV show (or Hulu Original) I really wanted to see that didn’t already allow next-day streaming on its own platform.

For instance, HGTV is one channel that does not allow any episodes to be streamed for free without a cable login. And my wife is really into the show Fixer Upper. So, back when that show was still airing new seasons, we would sometimes sign up for Hulu. That way, she could get her Fixer Upper fix (pun intended) each week.

Finally, it’s important to note that at the $5.99 price point, some shows on Hulu will have ads. A no-ad version of Hulu is available, but it will cost you $11.99 a month.

Over the past 3-5 years, there has been a huge shift in the TV industry. As millennials and post-millennials started cutting the cord in droves, it provided an opening for “TV streaming” services to grab a slice of the market.

Sling TV (which we’ll take a look at next) was the first company to create a successful streaming TV service. Since then, several companies have launched competing platforms. And in 2017, Hulu entered the fray with their Hulu + Live TV service.

Hulu + Live TV gives members access to all the same content that’s available in the basic package. Plus it adds 60+ live and on-demand channels.

You can also record live TV with 50 hours of Cloud DVR storage. Hulu + Live TV is currently priced at $44.99 a month.

Sling TV made waves in 2015. They announced that they were going to provide slim cable packages that would start at $20 a month. Their initial package only offered 20-something channels. But it included several high-demand ones like ESPN, AMC, TNT, CNN and Disney.

Sling has grown since then, both in popularity and the number of channels available on their platform. Currently, they have three main packages:

Sling TV has several add-on channel packs that focus on themes like Sports, News, Lifestyle and Kids. Most of these “extras” packages are priced at $5.

Between their basic plans and add-ons, Sling has deals worked out with nearly every major cable network. If there’s a channel you’re really into, Sling TV most likely has it. They also have a custom-built app for just about every streaming device you could think of.

We’ve subscribed to Sling TV numerous times over the past three years, and we’ve enjoyed the service. One thing that I do wish they offered, though, is free cloud DVR for recording our favorite shows. Right now, Sling charges an extra $5 a month for this, which kind of annoys me.

YouTube TV is another popular streaming TV service. One of the things that I really love about YouTube TV is that they fully expect (and even encourage) members to share their subscriptions with family members or friends.

Great for splitting the bill

YouTube TV allows for six different Google accounts to share the same YouTube TV “family group.” This feature allows me, my parents and my two brothers, to split the cost of our subscription four ways.

And even though YouTube TV recently raised their price to $50, we’re personally only paying $12.50 a month. That’s an incredible price for access to over 70 channels.

One other cool thing about YouTube TV’s family groups —- each person in the group gets their own DVR library with unlimited cloud storage.

You won’t ever have to worry again about your parents deleting your “This is Us” recording while they are trying to figure out how to record “Jeopardy.” And your recordings will be saved for nine months, which is quite a bit longer than many other streaming services allow.

Another nice thing about YouTube TV is that they won’t launch in a new area until they have worked out deals with the local broadcast stations for the “Big 4” networks (ABC, CBS, NBC and FOX).

This is especially important if you are a sports fan (like me). For example, in our area, Sling TV is only able to show live programming for FOX. This makes Sling a no-go for us during football season and YouTube TV becomes our go-to TV streaming service.

PlayStation Vue is a streaming service owned and operated by Sony. Although the name could lead you to think otherwise, you don’t have to own a PlayStation device to use the service. It’s available on the web and every major streaming device.

They allow five concurrent streams at a time and free cloud DVR. However, DVR recordings are only available for 28 days.

Launching in late 2017, Philo TV is one of the latest entrants to the TV streaming wars. What makes them so unique is that they don’t even try to mess with offering broadcast channels at all. They stick to strictly cable channels.

This focus allows them to offer a lot of popular channels for incredibly affordable prices. Right now, they offer two packages:

Here are a few of the many well-known channels that you can get access to for such a small price with Philo TV:

They really have a great lineup. In fact, Philo TV is trying to create their own lane instead of trying to directly compete with the other TV streaming services. And I think that’s smart.

At this point, you know the drill. DirectTV Now offers a lot of the same channels and capabilities that the other TV streaming services do.

If you’d like more channels than that, you can scale DirectTV Now up to 125+ channels for over $135/month. But at that point, you’d be paying more than the average cable bill. In my opinion, that kind of defeats the purpose of going with a streaming service in the first place.

Currently, DirectTV Now is including HBO for free with both of their main packages. But it’ll cost you an extra fee with virtually every other streaming service. So if you’re a big HBO fan, DirectTV Now could save you some money.

When it comes to DVR ability, DirectTV Now is kind of…meh. They do offer free cloud DVR, but only 20 hours worth of it. The rumor is that they will soon make it possible to add more DVR hours to your plan, but only for an up-charge.

There are so many ways to save on TV today. With these alternatives to cable tv, there’s no excuse to ever pay full price for a cable or satellite TV package.

Which of these alternatives are your favorites? Connect with us on social media to let us know and tell us why!