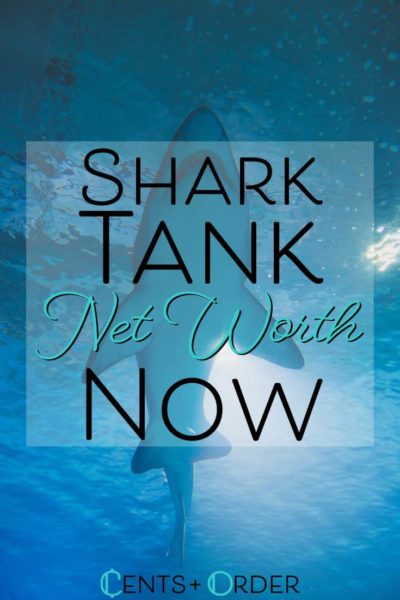 If you haven’t watched it, you’ve probably at least heard of Shark Tank. This reality television series concept first aired in Japan in 2001 under the name Dragon’s Den.

The American version of the show, Shark Tank, began airing in 2009 under the guidance of game show producer and guru Mark Burnett.

The premise of the show is that people – regular Joes and Janes – come on the show and pitch their entrepreneurial ideas to the Shark Tank team.

As with most reality shows, some of the ideas presented are brilliant. Others, not so much. However, one of the attractions of the show is that guests pitch their ideas to a wealthy team of serial entrepreneurs.

Thanks, to Shark Tank, names like Lori Greiner, Robert Herjavec and Daymond John have now become household names. Bonus: not only has the popularity of the Shark Tank “sharks” grown, so have their individual net worths. Just how much are each of the Shark Tank investors worth? Let’s find out.

We’ll start in order of “least” net worth and move on toward the greatest. I put “least” in quotations because even the “poorest” of the sharks is ridiculously wealthy. However, they’ve all worked hard to earn their money.

Self-education, intense research and many long hours at work have paid off well for these entrepreneurs.

Barbara Corcoran is one of the two predominant females on Shark Tank. Along with Lori Greiner, these two powerful women hold their own against the male entrepreneurs on the show.

Believe it or not, Corcoran began her career in the early 1970’s with an education degree. She taught for a year before being bitten by the entrepreneurial bug. Soon she was renting out apartments in an effort to work for herself.

To date, Corcoran has authored several books, and still continues to partner with other entrepreneurs. Her top product and service partnerships include Cousins Maine Lobster, Bee Free Honee and Daisy Cakes.

Corcoran’s net worth? A comfortable $80 million.

Lori Greiner, the tall female shark with the long blonde hair, got her entrepreneurial start in the 1990’s. Her first invention: a plastic organizer that could hold over 50 pairs of earrings.

She also dabbled in writing (both journalism and plays) during that time. Ultimately, she decided that product invention was probably her best bet – and she was right.

After inventing and promoting products on channels such as QVC, Lori owns the rights to over 700 products. She also has over 120 U.S. and international patents to her name.

The clever businesswoman has proven time and again she knows what she’s doing in the product promotion business. According to her website, she’s got a 90% success rate on new items launched.

Her current net worth? An impressive $100 million.

Robert Herjavec, the infamous Dancing with the Stars shark, was born in Croatia. He grew up on a farm, and later moved to Canada.

When his family arrived to Canada (they were escaping the Communist regime), they learned quickly that they were of a much lower social class than those around them.

Herjavec’s father worked hard as a factory worker, but never complained. He wouldn’t allow Robert to complain either. Herjavec contributes this “attitude of gratitude” as a major factor in his successes.

His early interests included politics; he graduated with a double degree in Political Science and English. He spent some time working in software development, and in fact his first business, BRAK Systems, focused on integrating software security.

Lest you fear that your first business won’t be a success, be assured that this is not always the case. In fact, Herjavec sold Brak Systems to AT&T Canada for over $30 million.

However, before that stunning success, Herjavec dabbled in “hard work”. While he put himself through college, he worked several “normal” jobs such as waiting tables, delivering newspapers and retail sales.

He used the money to live on and to help support his family. Herjavec’s hard work and perseverance paid off. Today, he’s worth $200 million.

Daymond John, the shark with the uber popular book under his belt, The Power of Broke, grew up in Queens, New York.

He grew up not afraid to take on seemingly “menial” jobs. He waited tables and handed out flyers in order to earn cash. Once in high school, he signed up to take part in a program that would allow him to work while in school.

As a young man, John broke into the world of business by starting his clothing line, FUBU (an acronym for For Us, By Us). John and his neighbor began their clothing business by selling wool hats and screen-printed t-shirts.

John and his mother mortgaged their home twice, taking out large loans to fund the business. It worked. To date, FUBU has earned over 6 billion dollars in sales.

John’s books, businesses and speaking career have rewarded him well.

His current net worth is estimated at $300 million.

Like Robert Herjavec, the Shark Tank’s Kevin O’Leary also hails from Canada. He was born and raised there, the son of a Lebanese mother and Irish father.

O’Leary had planned on becoming a photography when his stepfather (his parents divorced when he was young) convinced him to go to university. His degree is in environmental studies and psychology – both which have little to do with business and investing.

However, he does have a Master’s degree in entrepreneurship. In 1986, O’Leary started a software business called Softkey, along with two business partners.

He eventually convinced printer manufacturers to bundle his software with their printers, ensuring distribution.

The acquisition did not go well for Mattel, which ended in a lawsuit and huge losses for the company. O’Leary went on to invest in other businesses, such as a climate-controlled storage unit company and a mutual fund company.

Mr. O’Leary’s current net worth is about $400 million.

Shark Tank’s sports-team-owning Mark Cuban grew up in Pittsburgh, Pennsylvania. Cuban dove into the world of entrepreneurship at a young age. When he was 12, he sold garbage bags to pay for an expensive pair of shoes.

He spent his final year of high school as a full-time student at the University of Pittsburgh. He eventually transferred to Indiana University and then Kelley School of Business with a B.S. in Management.

In 1982 Cuban moved to Dallas, Texas, where he found work as a sales person for a software company. He got fired from the job when he went to meet with a client to obtain new business instead of opening the store on time.

He took the initiative gained from losing his job to start his own software company, MicroSolutions. In 1990, Cuban sold the company to CompuServe for $6 million. He participated in a variety of other business ventures and joined Shark Tank in season 2.

Today, Cuban owns multiple well-known businesses, such as Magnolia Pictures, a majority stake in the Dallas Mavericks, and a principal ownership stake in the Professional Futsal League. Futsal is closely related to soccer on many levels.

Cuban is also the owner of at least two charitable foundations, the Mark Cuban Foundation and the Fallen Patriot Fund.

His net worth currently stands at $4.1 billion, astronomically higher than the net worths of the other Sharks.

So, when it comes to the “regular” Sharks, those we see on TV every week, you’ve heard it all. But what about guest Sharks? What are their net worths? Take a gander and find out.

Here, we’ll touch on the net worth of just a few of the popular guests featured on Shark Tank.

Ashton Kutcher appeared as a guest on Shark Tank during season seven. The Iowa-born native who starred in famous TV series’ such as That 70’s Show and Two-and-a-Half Men now spends some of his time as an angel investor for tech start-ups.

The savvy investor made early investments in companies such as Spotify, Uber, and Airbnb. Although Kutcher does a terrific job of playing the not-so-bright guy on TV, he clearly has some serious business smarts.

Chris Sacca is an entrepreneur and investor who guest starred on Shark Tank during seasons seven, eight and nine. Sacca was born and raised in Buffalo, New York, the son of an attorney father and professor mother.

He holds degrees in law and technology and used some of his student loan money to start a company while in law school. The business failed so he used the remaining funds for investing in the stock market.

The venture worked: He turned his $10,000 to $20,000 dollar investment into $12 million dollars in less than ten years. However, he lost it all and more during a market crash crashed in 2008, leaving him four million dollars in the hole.

He got the debt reduced down to 2.125 million and had it paid back in its entirety by February of 2005. Eventually, Sacca began investing in companies as an angel investor. Some of his early success in this arena include Photobucket and Twitter.

Today he continues to invest in businesses and dabble in charitable and political opportunities as well.

His current net worth stands at $1.2 billion.

Who would’ve guessed you could make a fortune by selling leggings? Sara Blakely, founder of Spanx leggings and intimate apparel, took that bet and won.

The season nine Shark Tank guest shark initially wanted to become an attorney. However, her L-SAT scores were low, so she abandoned that dream.

After learning she was good at sales, Blakely began to research hosiery development. She was annoyed at the pantyhose she had to wear while working as a National Sales Trainer for Danka, a company that sold fax machines.

She eventually moved to North Carolina; a hosiery mill mecca, where she would have more opportunity to promote her ideas for comfortable and attractive hosiery.

Blakely was turned down by every company she approached, until one mill operator decided to support her idea, being spurred on by his three daughters.

As you might know, Spanx took off rather rapidly at that point. Sara Blakely is now worth a cool $1 billion.

“Sir” Richard Branson is the CEO of the ultra-popular Virgin Records, now known as Virgin Group. The corporation now includes Virgin Airways and Virgin mobile as well, among other ventures.

Branson and his business partner chose the name “Virgin” because they were virgins in the business. Obviously, the decision paid off.

Branson starred on Shark Tank during season nine. He has also played himself on several TV shows, including Baywatch and Friends.

Branson is known for his interests in exciting ventures such as space travel and ballooning. His current net worth beats out all of the other Sharks and shark guests, standing at $5.0 billion.

The various Shark Tank hosts and guest hosts may all have made their fortunes from different ideas and avenues. However, one thing is clear: they all lean on perseverance and the ability to think outside the box.