Chip and Joanna Gaines Net Worth in 2019 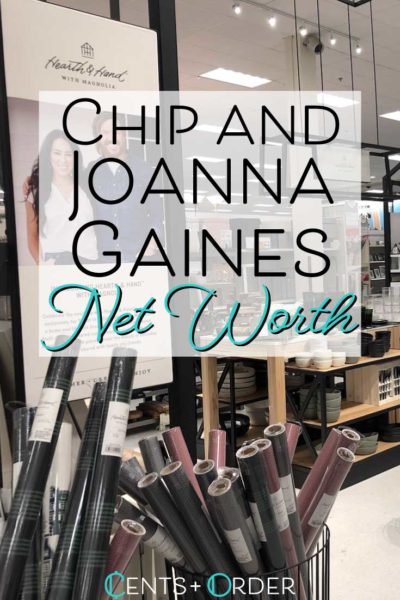 Do you watch the adored home improvement show Fixer Upper? On the show, husband and wife team Chip and Joanna Gaines help couples find homes they want to buy. The homes need varying amounts of improvements, which are left to Chip, a contractor, and Joanna, a designer.

Typically, the show starts out like this: Chip and Joanna use their real estate licenses and experience to help a couple find a home.

Each couple looks at three homes, discussing the pros and cons of each home. From there, the couple talks about their likes and dislikes of each home. Then they make note of what can and can’t be changed.

The Gaines’ give them financial estimates on the updates they’d want made to each home. Then the couples decide which home they want to buy, and renovations begin.

Of course, there are roadblocks and mishaps throughout the renovation period. Projects come in over budget. Renovations reveal expensive repairs. But the team seems to handle them all with style, innovation and grace.

At the end of each episode there’s the “big reveal”, and the couple gets to see what the finished project looks like. Of course, they’re always thrilled with the end result, and audiences wait eagerly for the next episode of Fixer Upper.

Chip and Joanna Gaines: The Start of an Empire

Interestingly, neither half of the couple started out geared toward careers in home construction or design. Joanna, the daughter of an American father and a Korean mother, went to Baylor University and earned a degree in Communications.

An internship in New York City sparked a flame in Joanna for the world of design, and a passion was born.

Chip went to Baylor University’s Hankamer School of Business and earned a marketing degree. However, his love has always been for hard work done with his own two hands.

He spent much time as a child on his grandfather’s North Texas ranch. The couple’s Magnolia website says he’s “always preferred digging ditches to academic pursuits”.

Chip has remodeled hundreds of homes in the Waco, Texas area. He’s certainly taken his passion for hard work and turned it into a successful business.

How Chip and Joanna Gaines Net Worth Got into the Millions

What is the net worth of the power remodeling couple? As of 2019, Chip and Joanna Gaines net worth stands at a comfortable $18 million. However, amassing their fortune didn’t happen overnight.

The two met when Chip was getting work done on his car at Joanna’s father’s automotive shop. He knew right away he’d marry her after he saw a picture of her on the wall of the shop. She agreed to date him but needed to learn more about him before making a life-long commitment.

The couple bought their first Magnolia store after they married, but closed it after they had their first two kids. At that time, they chose to focus on real estate, fixing and flipping homes for profit. They worked together to take broken down homes and make them into something attractive.

Consequently, HGTV (Home and Garden TV) approached the couple about pursuing the show’s idea for Fixer Upper several years later. The first episode aired in 2013, and the first full season aired in 2014.

Fixer Upper Secret: The couples featured on the show don’t get to keep the furniture and other décor items you see in each episode. However, they are able to purchase any items they want to keep with the house.

The couple finished their last season of Fixer Upper in 2017 in order to spend more time with family. However, by that time Fixer Upper and the Gaines’ popularity had spread far and wide.

In fact, Joanna Gaines has now acquired her own series, a spinoff of Fixer Upper called Fixer Upper: Behind the Design.

The half-hour long show features Joanna explaining how she comes up with her amazing designs.

In addition, the Gaines family reopened the little Magnolia Store that they had all those years ago. Magnolia Silos is located downtown Waco, Texas and functions as an online store as well.

The Future Fortune of Chip and Joanna Gaines

It’s not surprising that the couple pulled the plug on Fixer Upper. They’ve long stated that family comes first, and that if it felt like the series was hindering family bonding that they’d quit in a heartbeat.

Raising their four children (two girls and two boys) is their top priority, as is keeping their marriage strong. The family likes raising the kids in the simple life in their Texas home. In fact, the Gaines family doesn’t own a television and the kids play outside on a regular basis.

Hopefully Joanna’s new spinoff series will be a bit less straining on the family’s schedule. It’s clear the couple isn’t done making family a priority. Early in 2018 the couple announced they were expecting their fifth child.

And the couple has hinted that they wouldn’t be opposed to having additional children as well.

In other news, Magnolia Silos expanded by opening the Silos Baking Company in June of 2016. If you visit the Waco, Texas bakery, you’ll find a wide array of baked goods from cinnamon rolls to cupcakes.

It’s clear that Chip and Joanna Gaines are nowhere near finished creating inspiring goods for people to view – and eat.

In 2018, the couple purchased a historic restaurant – The Elite Café- that chose to close its doors after nearly 100 years in business.

After adding their personal decorating touches, the couple opened the Magnolia Table café. The place is already experiencing the success of an established restaurant. In fact, they even had to build an outdoor courtyard with ample seating to provide a place for guests to wait for tables.

When you visit, don’t forget to stop by the market located in the restaurant as well. You’ll find all sorts of café goodies “to go” when you visit.

What did you think of Chip and Joanna Gaines net worth? Were you surprised? Did you think it would be more, or less? And what do you think of their show, Fixer Upper? Sad to see it go, or relieved to have it end?