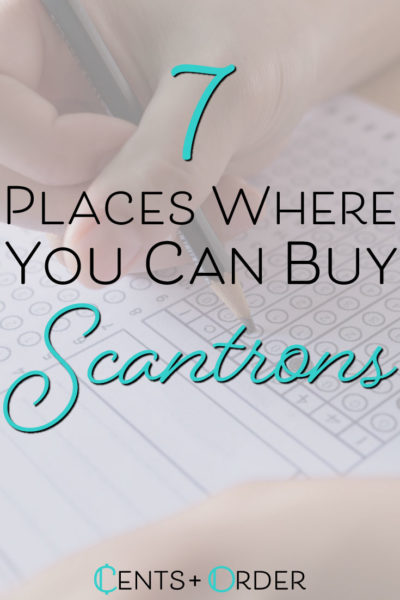 If you’re a college student, you may need to buy Scantrons. The bubble, fill-in form testing sheets are needed for exams throughout your time in college.

Some colleges provide Scantrons for students. However, many colleges today insist students buy their own Scantrons. Budget cuts and rising costs are encouraging colleges and universities to push the cost of Scantrons off on students.

Many college students look for jobs just to make ends meet. So when schools make you buy Scantrons, it’s only another dent in the bank account. But where is the best place to buy Scantrons?

Is there a way to buy Scantrons and save (or even make) money at the same time?

Where to Buy Scantrons

You can buy Scantrons a couple of different places; however, it’s important to be aware of one thing. Scantron is a brand name that refers to a popular test sheet used in schools. In contrast, there are knock-off test sheets that are not Scantron brand.

As we talk about Scantrons in this article, we’ll also be clear about sources and whether they sell Scantrons or other brands. The brand is important depending on what type of scoring machine your school uses.

One of the best places to buy Scantrons is the Scantron store website.  Not only does this site sell the Scantron testing machines, but it also sells forms as well.

They sell dozens of tests, surveys and ballot forms. For this reason, you’ll need to know the test number of the form your school wants you to purchase.

To find forms, go to the search button and enter “ordering forms.” Click on “selecting a form” to locate the kind you need, then click on “ordering forms” to place your order.

Note that the Scantron website only sells the forms in bulk. By “in bulk” I mean they often sell them in packages of 500. To clarify, you won’t need 500 scantrons.

So if you choose to buy the Scantrons via the Scantron website, you may want to consider making some of your money back. Just sell them to friends and classmates at a lower price than they can find elsewhere.

2. Your College or University Bookstore

School book stores typically sell all of the types of Scantrons you’ll need for your class tests.  Unlike the Scantron website, you can buy Scantrons in smaller quantities at college bookstores.

Check your college bookstore during open hours to find out what they sell and for how much.

Schoolcraft College Bookstore is an online bookstore that sells Scantrons. You can get Scantrons here via their online store in much smaller quantities than the bulk purchases you need to make to get Scantrons elsewhere.

For example, you can get many of the forms in a 6-pack for under $2. When you buy directly from the Scantron store and elsewhere, you often have to purchase packs of 500 tests.

If this is true, you might want to check out this option. As of this writing, the 882-E compatible forms were selling for 50 for $6.62. This is a much better deal than most college bookstores.

You might find you need to have 50 throughout your college days, or you could sell the extras to classmates for a bit of a profit.

Comments in the question and answer section state that students haven’t had any compatibility issues while using these generic test sheets.

As mentioned earlier, you likely won’t need 500 forms. For this reason, if you choose to buy in bulk, take the extras and make yourself some money. This could be one of many great side hustle ideas you could start right away.

In addition, this company offers free shipping on all orders.

They sell them in smaller quantities (ten and under in many cases), and you can even purchase some Scantron forms singularly. The downside of buying online through a college bookstore is that you’ll likely pay shipping fees. This will drive up your overall cost of the Scantrons you purchase.

7. Many College Bookstores With Online Sites

During our research for this article, we found that many universities with online bookstores sell Scantrons to the public. You can search online stores for colleges near you, or simply do an internet search for “where to buy Scantrons.”

As far as cost goes, your best bet per test page will likely be Amazon if you buy the compatible forms they offer. However, if you’re just looking to buy a few, online college bookstores will help you spend less overall.

Where You Can’t Buy Scantrons

Unfortunately, most big box stores and office stores don’t sell Scantrons or compatible Scantron forms. You likely won’t be able to find Scantrons at stores such as:

These types of stores typically don’t carry them. However, when visiting their websites, you may find ads for online stores that do sell Scantrons.

There are many places you can buy Scantrons. The best sources are online – especially if you don’t attend college currently and don’t have immediate access to a campus bookstore.

And if you buy the Scantrons in bulk, you could potentially make some extra cash by selling them to fellow students. College costs may be on the rise, and it’s tough to pay for college and not graduate burdened with student loans.

Adding costs for items like Scantrons – no matter how cheap they are – is just one more monetary burden. Work to find Scantrons at a deal and it will help you save money. Every penny adds up.

Does your college or university make you buy your own Scantrons? If so, where do you get them? Feel free to share in the comments section on our Facebook page.