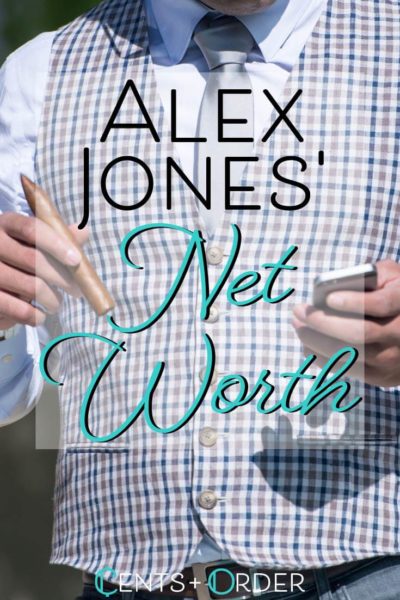 While you may or may not agree with his views, Alex Jones is certainly entertaining enough. For those not in the know, Alex Jones is a popular conspiracy theorist and radio talk show host.

He talks for hours each day (along with staff) on the (true or imagined – it’s your call) world’s worries. Some of the subjects on his popular website include 2nd amendment rants, deep state conspiracies and fake news ousts.

Unless you’re an advocate against Jones; then he is a publisher of fake news. Whatever side of the Jones camp you’re on, there’s no arguing that he rakes in some pretty serious dough.

So who is Alex Jones, and how is he making so much cash?

Alex Jones is most recognized as a radio talk show host. His talk show, Infowars, went on the air near Austin Texas in 1999.

He also makes money from his website, Infowars. Infowars shares information about his radio show and his store products. The Infowars website is said to be more popular than Newsweek, receiving approximately 10 million visitors each month.

Jones is well-known for his often unfathomable but widely received conspiracy theories regarding the U.S. government. Every day he shares real or perceived secrets about the government’s hidden attempt to destroy us all.

Some of his more well-known conspiracy theories include:

Love him or hate him, Alex Jones is nothing if not entertaining. Spend a few minutes listening to his radio show and you’ll either be totally mesmerized or seriously annoyed.

The urgent tone in his voice and wild-eyed stance can be alarming and frankly, a bit intimidating. Of course, that’s a lot of what makes Jones so popular. But now onto the real question you’re all wondering about: How much is Jones worth?

What is Alex Jones’ Net Worth?

Alex Jones wasn’t always wealthy, but it’s safe to say he was probably always comfortable. Young Alex grew up in Texas, the son of a dentist father and a homemaker mother. He attended Austin Community College briefly after he graduated from high school, but eventually dropped out.

After a few gigs on cable access and local radio shows, Jones started broadcasting via Internet from his Texas home. Supporting local and national radio stations came and went, often dropping his program after outlandish claims.

But in the end, money wins and Jones’ popularity deems him worthy to have Infowars broadcasted on dozens of radio sites around the U.S.

Sources say his net worth is about $10 million as of 2019. But where does that money come from? You might be surprised.

Jones does get a good portion of his income from his radio talk show. After all, his YouTube channel alone has over 750,000 subscribers.

Wildly outlandish or not, people want to hear what the guy has to say. Whether out of fear or curiosity, people find his claims of government undermining its people fascinating. However, a primary source of his income lies in his ability to market to loyal radio show and YouTube listeners.

Along with his broadcasting income, Jones rakes in millions a year from selling books, t-shirts, videos, etc. on his website. It’s also safe to say he earns a good living from product representation.

Speaking of that, prepping is another subject Jones talks about on a regular basis. I’d love to see what his home compound looks like. Is there a storage area filled to the brim with freeze-dried foods? Or is he just like the rest of us with a wide array of fresh foods and packaged, processed goodies?

Whatever his true beliefs are, it’s certain that Jones makes big money to promote products on his popular website.

The popular conspiracy theorist has also dipped his toes into the movie-making industry. Alex Jones has directed more than 17 documentaries on various conspiracy theory subjects.

Some of the documentary titles you’ll find at the Infowars website store include:

Well, the titles are nothing if not intriguing. And it’s clear all of these business ventures bring Jones income level up substantially each and every year.

But large following and massive income aside, Jones has been involved in his share of controversies. One of his most widely-known conspiracy theories is his claim that the Sandy Hook school shooting was fabricated.

He’s also a staunch believer that the U.S. government is behind the 9/11 attacks. These and other conspiracy theories promoted by Jones have gotten him in hot water with various groups.

On a few occasions Jones has issued retractions of his conspiracy claims due to pending lawsuits. Regardless of these legal battles, Jones still insists the government is inundated with plans for humanity’s destruction.

Regardless of how you feel about the oft-entertaining Jones, it’s clear that he’s making decent cash in his career.  Fear-monger or truth-revealer, Jones’ $10 million net worth is impressive.

One thing is clear: there are many, many ways to make money and build wealth in the world today. Some people do it by working a 9-to-5, saving regularly and spending cautiously.

Others do it by starting or joining in on business ventures they believe will become successful. And still others gain wealth by betting on the continued rise of the stock market.

Legit or not, Alex Jones has built a business that brings him a seriously enviable income and a net worth around $10 Million. As proven by the many net worth reports out there, entertainment is a huge money maker for those with talent.

What do you think of Alex Jones’ net worth? Is he a smart businessman, a valued informant or a raging maniac? Give us some ideas in the comments section.